When will all three volumes of “Myre“ be available to the public?

It's difficult to estimate when the entire series will be available. Keep in mind, Alector Fencer is the single artist responsible for each and every painting in the story. Obviously, this won't be a series that will be on your bookshelf in a few months. What we can say is that the first volume is planned to be released in Autumn of 2015. By that time, we'll be able to give a better estimate as to when the final two books will be finished.

Will Myre be available online as web comic?

Though there will probably be the occasional comic strip featuring Myre posted to the internet, there are no current plans to release the “Myre” series online in its entirety.

How big will the graphic novel be?

“Myre” will come in a series of three volumes, each estimated to be around 100 pages, all full color.

After “Myre”, will there be more stories around the world Yria?

Yes! Yria is a huge place with many different characters, all with their own stories to tell. Currently, story lines for other characters on Yria are already being developed. The hope is that eventually, the world of Yria will have plenty more stories, heroes and villains to read about.

Since the land is so barren, what do people eat on Yria?

Generally, whatever they can! Most Yrians have eaten at least a few fire lizards in their time. Luckily, the merchant and trader business is quite active on Yria, so it's not unusual to see a Yrian with berries from a distant, fertile cave or some bread baked in one of Yrias more lavish cities.

What species is Myre?

Technically, since Yria is a different planet entirely, no one there can really be identified as any species from our reality. However, the closest comparison for Myre would be a maned wolf.

How large is the world that Myre and Varug live in?

It's extremely big. Truth be told, we're not even sure how large Yria is. But we do know it's much larger than Earth.

What actually is Myre's mount?

Myre's mount is a dragon named Varug! Though, as you'll see, Varug is much more than just a fancy ride for Myre. The two are actually inseperable friends.

Is the character Myre a reflection of your own personality that you roleplay?

No. I neither roleplay, nor is Myre a reflection of my own personality. Surely, when creating a character, every artist incorporates certain properties and characteristics they observed from real people in their environment. The more people those artists observe, the more their spectrum of versatile features expand.

Is the world Yria and the story of Myre going to be made into a game?

At this point, nothing is off the table for Yria. Many people have presented many great ideas to us and we're considering them all. There are no solid plans to turn Myre into a table top or card game, but we think the idea is great and if the opportunity presents itself, we'd love to do it!

Is Myre a video game?

Don't we wish! “Myre“ is currently a graphic novel. However, a video game version is something we've definitely considered. If the graphic novel is enough of a success, then who knows what could happen!

Are you turning Myre into a full length movie..?

We'd love to! Unfortunately, such a project would require a huge staff and lots and lots of money. However, we're always keeping our eyes open for opportunities regarding “Myre“ and if we get the chance, we'll certainly take it.

Are there forests on Yria too?

Sure! There might even be an ocean or two. Yria is so vast that it likely has all kinds of hidden forests and secret places all over. That's what makes it so interesting to explore!

Can we maybe see a male Counterpart of Varug?

Yes. One part of the series will also include the male version of Varug's species. “The Encyclopedia of Yria” will explain the species and their attributes in a detailed way.

What on earth do the large creatures of the Dwellers eat?

Basically, they eat everything they can scoop up on their way. I designed them to have an extremely slow metabolism along with an extremely slow pace of walking. Those beasts can meander across the planes for days and weeks before settling down for a rest.

What is Boozer's real name?

Only the Boozer knows that. We've tried to get him to tell us, but then he just weaves some tall tale about whiskey.

What inspires you when you make these pictures and designs?

My main inspiration for pictures in general is nature itself. I take impressions from places I have visited and add my own landscape designs to them. Of course, inspiration and a vast imagination plays the biggest role in this process. It gets interesting when a design I come up with needs to be made feasible.

Can I live in your pictures?

The main goal of an artist is to create pictures for his or her viewer to enter them. That is why this question is a high compliment to me as an artist. It makes me feel accomplished in a way. Whether or not you want to enter and live in them is, of course, your own decision. 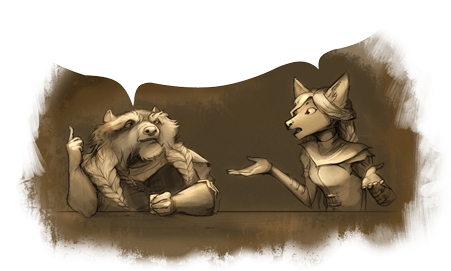